Is there a future for HR?

Are you looking for
a training?

Do you wish for us to conduct
courses at your premises?
Discover In-House
Solutions

If you are worried about the future of HR have a look at a few of these questions:

Its just a bit of fun; however the answer to all the above is  “True”

It’s hard not to see the effect and use of Artificial Intelligence (A.I.) everywhere.

If you carry a smartphone you are unwittingly involved in A.I. data collection. Since 2018 A.I. has moved at a pace that can only be expressed as breath – taking. The rate of change is expediential and now is irreversible.

In August 2019 an IBM spokes person said “’A.I. is going to change 100% of jobs,’
Grace Suh, IBM’s VP of education, says it’s important for countries around the world to focus on the opportunities presented by technology.

It’s important for us not to forget the figure quoted above; 100%

Such is the certainty shared by most people leading the wave of A.I.

How will this affect Human Resources? Human Resources and Artificial Intelligence. From 2020 the world will start to feel the effect of A.I. in particular the world of employment, but this time the jobs wont be returning, governments are already discussing the need for Universal Basic Income to cope with a wide spread unemployment issue.

In China Fox Conn used to pay its workers $2.50 an hour. It was cheaper to replace the workers with Fox Bots; changing to using this system resulted in AI robots replacing 40,000 people in their Chinese factories. In case you have not heard of this company it’s one of the largest in China employing 800,000 people. Human Resources and Artificial Intelligence

I think its important not to see A.I. as a threat, but to seek out how it can be used and take advantages of the opportunities it will bring for those who are prepared.

As far as Human Resources Departments are concerned now is the perfect opportunity to demonstrate the value of planning and managing the introduction of A.I. systems.

Some actions that are needed immediately:

What will the processes look like? HR systems could be aligned with A.I. processes, shown here is a schema of how most HR processes will be aligned and controlled eventually by A.I. 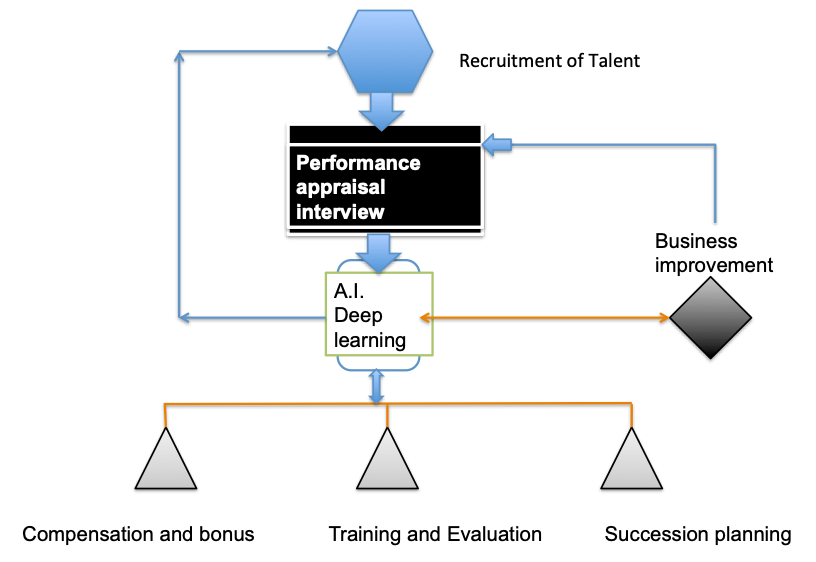 Its important that HR sorts out a number of data issues quickly.

For example; is data collected in the same format e.g. on a 0 to 100 scale? The three critical pieces of data are, Competency, Performance and Reliablity, combined this produces sustainable productivity.

Minimum standards need to be set for each of the above as well as company average. These standards will vary considerably. The biggest split is likely to occur if you try to match performance standards with China for example.

Other vital information will be what is your workforce performance like? For example do you know the following information:

An estimation of how many hours they actually work in a contractual 40 hour week. This is basic Workforce Planning information, which should be readily available.

HR has a unique and once in a life – time opportunity to make a massive business contribution.

A.I. provides that opportunity, make sure your trained and well informed, most importantly – act now A.I. won’t wait for you.

Contact request sent successfully. One of our representative will call you shortly.

You need to accept the terms & conditions in order to proceed ahead.

All the fields are required!